Taking a product to the public for the first time isn’t just a sales exercise, it’s a learning opportunity! 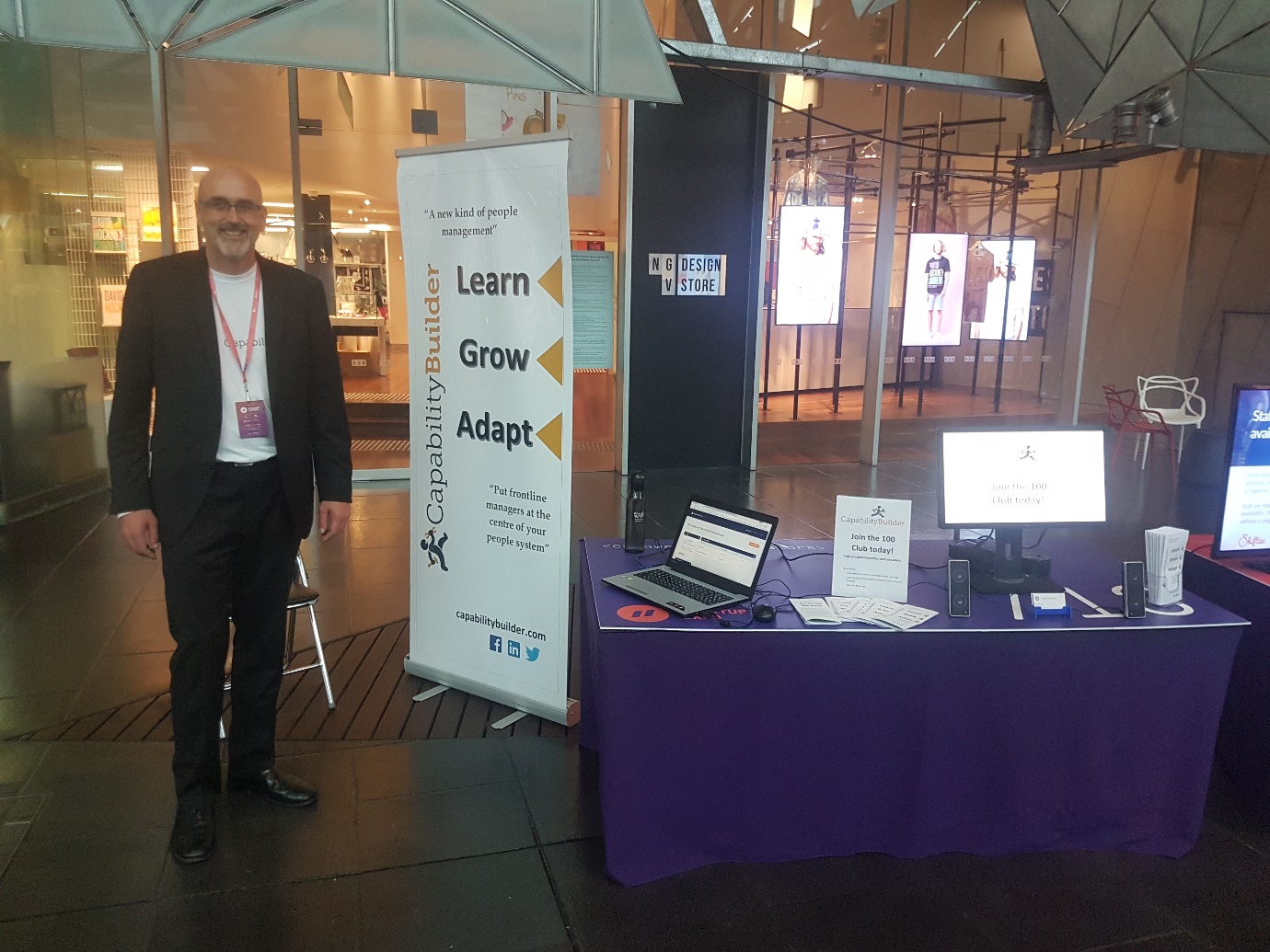 Steve gets ready for the rush

Three days, over a hundred speakers and panellists, hundreds more attendees from across the Australian and international creative, communication and technology scenes, more VR than you can poke a virtual stick at, and a Tesla car.

PauseFest 2017. “Australasia’s premier innovation festival”, according to the website. In reality a cross between a trade fair, mass meetup and academic conference. It’s been held every year since 2011 in our home town of Melbourne. Not only do participants get to revel in a torrent of challenging ideas, they get to spend some time in the ultra-modern surrounds of Federation Square on the banks of the Yarra River, enjoying the best the city has to offer.

On top of all that, we scored a sought-after slot in the Startup Expo, where new local tech companies got to showcase their wares to festival goers and the general public in among the soaring glass and black marble of the Fed Square Atrium.

Rather than provide a summary or review of Pause, I thought I’d offer some reflections on my experience showcasing our role maker app for random passers-by for the first time.

My feet ached, my throat was croaky raw, and I had too many stimulants on top of too little food.

We set up our booth around 7.30, and were still going at 4.30 that afternoon. In between I had a few short breaks thanks to tag teaming co-founders and great neighbours (especially our booth and co-working neighbour John from Shiftiez). Most of the time was spent on my feet talking to people and showing off the live app.

The first lesson I’ve learned about running a booth is: self-care!

I wore the fancy boots, but something softer and more supportive would have been a better choice. Bring lots of water and plenty of snacks. A sackful of snacks. An iron law of nature is that if you try to eat proper food, even a sandwich, someone will stop by to talk. Maybe next time I’ll get some of those energy gels like a Tour de France rider!

Despite this, there is still no such thing as too much coffee.

Don’t pitch … but always be pitching

Having spent months refining my elevator pitch, it was challenging to be in a space with such a diverse population. People wandering startup alley didn’t have big signs over their heads. And they never started by telling me about themselves or their agenda. I was the one on show, and they quite rightly expected me to open the interaction. At best they might politely invite the pitch by asking “so, what do you do?”

There were very few people actively searching for products to buy. A handful were investors looking for opportunities, but of course they were especially cautious about announcing the fact. Some were just passing the time, and more than a few were actually trying to sell me something (not that I blame them). A few are just there to talk about themselves (especially in a public space). Very few, if any, happened to come looking for exactly what I was selling.

The Golden Rule of pitching, especially elevator pitches, is don’t sell the product, sell the benefit. The same holds true for advertising. People respond to messages that connect at an emotional level, and thus with their values. When you have 30 seconds to engage someone with an idea, whether it’s a new car or a new app, you need them to care. So the classic Gaddie pitch focuses on benefits. “We empower your frontline leaders to focus on developing their people, so you get the engagement and productivity you are looking for”. Not, “we have this amazing new philosophy of people management based on a time-based capability matrix”.

Somehow in startup alley this golden rule gets turned on its head.

Almost every time I started to pitch the problem and the benefit people got impatient. Some fidgeted politely. Others cut right to the chase: “yeah, but how does it work?”

Maybe not every tech event is like this, but people seem to come to Pause to play. They want to experience and they want to explore. They want to understand what everyone is doing and why. Even the folks who took our flier and rushed off to “talk with our HR people”, the ones who got the problem and thought we had the solution, wanted to look under the hood first.

Over the course of the day I dialled my pitch back and back, to a simple proposition. “We’re replacing performance evaluation with professional development”. I let people ask me their follow up questions and show me what they were interested in. Each conversation was different, depending on the other person’s interests, experience or agenda. I still used all the elements of my pitch: problem, solution, benefit, example, but pulled them together as needed to help people explore.

My second lesson from Pause then is: don’t pitch, open a conversation.

You have to know your product back to front, and you have to have enough passion for it to want to talk about it all day. You also have to have the patience to let other people control the conversation. A difficult thing to do when you’re bursting to show your baby to the world, and you’re hopped up on coffee and free Red Bull!

Having something to show people really helps. We had a live demo account for people to work through. If you don’t, consider having a prototype, an interactive wireframe, a mock up, anything for people to get their hands on. (This isn’t always true, especially if you have a blinding idea that people get straight away, but it can’t ever hurt to show as well as tell.)

Pause is not the biggest tech event out there by any means, but it still boasts three parallel streams across three days. Naturally, being a 6Ps sort of person (prior planning and preparation prevents poor performance), I try to manage this complexity at conferences by sitting down over coffee on morning one and plotting my course through the schedule. I look for topics of special interest or relevance, and speakers or panellists with particular expertise. Sometimes one has to agonise over a clash. Curry’s First law of Conferences is “the two talks you most want to see will be scheduled against each other”.

However, this approach has a downside. The prominent or obviously expert speakers can turn out to be poor communicators, or just stuck in self-promotion mode. The topic is often not as advertised. (I went to one talk at Pause by a well-known person, ostensibly on leadership, during which he simply showed treated us to his show reel.)

Meanwhile, people you’ve never heard of have been thinking hard and bland titles belie a rich vein of insights.

The best examples of this at Pause (for me anyway) were the seemingly-routine “Women in Tech and Our Role in the Digital Industries Sector” (which was introduced by the all-singing all-quipping MC Venessa Paech as “just another women in tech panel”) and the equally worthy sounding “Raising Start-Up Capital in Australia”. I’ll be honest, I went to both these sessions for wholly utilitarian reasons. CapabilityBuilder is a startup business with a mission to foster diversity, so it seemed important to learn more about how we might raise cash and about the current state of diversity in our own industry.

Instead of what I expected, these panels delivered wide-ranging and thought-provoking discussion on business ethics, philosophy of language, politics, social theory, and economics, with some social and technological prediction thrown in. Venessa Paech (Green Hat), Carol Johnson (Salesforce), Rebekah Di Blasi (KJR Consulting), Daniela Mazzone (City of Melbourne) and Fiona Boyd (Parent Paperwork) gave a master class in how to do a panel discussion. Their discussion was wide-ranging, dynamic, funny (and a bit rude), and generous with hard-won insight and experience. I learned a little bit about the current challenges facing women in the tech industry, but mostly I learned a lot about how to manage for success. Meanwhile Glenn Smith (Investor), Chris Duell (Elevio), Alexander Robinson (Airly) and Lucy Lloyd (Mentorloop) were incredibly frank and reflective about their journeys through the startup funding rollercoaster, from both sides of the table.

Next time I’m at a big festival or conference, I think I’ll just stick pins in the schedule at random, or use the Force. The gems are probably not where I expect them to be.

Will I Pause again?

Pause 2017 was a valuable experience. I renewed some acquaintances and met some interesting new people. Overall, most of the value came from the random factors. One great new set of friendships came from standing next to someone in the beer queue (hi there Light Creative). As I’ve already said, the best insights came from unexpected sessions.

I probably won’t have a booth again. That will wait for more people and culture oriented events where people are coming to buy.

If I do Pause again I’ll wear comfy shoes and just go with the flow! If I do, I’ll think I’ll get more insights to ponder and make great new connections with amazing people I wouldn’t meet otherwise.